Harmonic patterns can be used to spot new trading opportunities and pricing trends – but only if you know exactly what you are looking for.

How to use this guide?

What are harmonic patterns?

Harmonic patterns are chart patterns that form part of a trading strategy – and they can help traders to spot pricing trends by predicting future market movements. They create geometric price patterns by using Fibonacci retracements to identify potential price changes or trend reversals. Traders can identify these patterns and use them to inform their next trading decision.

There are multiple chart patterns to choose from, each of which can be used to spot a different kind of trend. However, it is important to note that before following any pattern, you should be confident in your ability to perform your own technical analysis, so that you are always able to make the best – and the fastest – trading decisions.

What Do Harmonic Patterns Indicate?

Generally, harmonic patterns have been developed to do two things:

This is what makes the action zones relatively easy to understand. If you follow the procedures for each pattern, one that predicts the length of a move, then you can expect a tradeable price reversal.

Now, let’s narrow our focus to the harmonic patterns themselves. Before we begin, let’s break down a few underlying concepts on which these patterns are based.

The Geometry of Harmonic Patterns

Harmonic patterns construct geometric pattern structures (retracement and projection swings/legs) using Fibonacci sequences. These harmonic structures identified as specified (harmonic) patterns provide unique opportunities for traders, such as potential price movements and key turning or trend reversal points. This factor adds an edge for traders as harmonic patterns attempt to provide highly trustworthy information on price entries, stops, and targets. This may be a key differentiation from other technical indicators and how they work.

Know Your Fibonacci Retracements and Extensions

There are plenty of guides about Fibonacci and the theory of how these numbers exist in nature and in the financial markets.

The graphic below illustrates how Fibonacci ratios are used to apply retracement, extension, projection, and expansion swings.

A Folded Geometry of Fibs

Most Fibonacci retracements and extensions are used to measure (or project) prices along a vertical grid (like an XY grid). They measure price downward or upward. What makes harmonic patterns unique is that they geometrically fold the fibs into the pattern itself.

Right now, you’re probably trying to visualize what we’ve just written, and it’s likely driving you nuts. No worries. It will be much easier to understand once we go over each pattern. For now, just remember that Fibonacci retracements and extensions are key to understanding how harmonic patterns are formed.

Most Harmonic Patterns Are Based on 5 Price Points 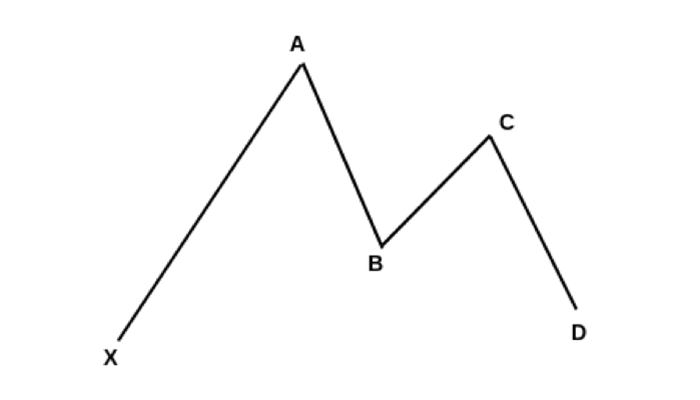 Here’s how it generally works: you have to measure each price point, making sure that it aligns with a specified Fibonacci model (depending on the harmonic pattern). If points X, A, B, and C measure up, then your action zone is at D.

The bullish pattern is often seen early in a trend, and it is a sign the corrective waves are ending and an upward move will ensue following point D.

The area at D is known as the potential reversal zone. This is where long positions could be entered, although waiting for some confirmation of the price starting to rise is encouraged. A stop-loss is placed not far below entry.

For the bearish pattern, look to short trade near D, with a stop loss not far above.

The Butterfly pattern is different than the Gartley in that the butterfly has point D extending beyond point X.

Here we will look at the bearish example to break down the numbers. The price is dropping to A. The up wave of AB is a 0.786 retracement of XA. BC is a 0.382 to 0.886 retracement of AB. CD is a 1.618 to 2.24 extension of AB. D is at a 1.27 extension of the XA wave. D is an area to consider a short trade, although waiting for some confirmation of the price starting to move lower is encouraged. A stop loss is placed not far above.

With all these patterns, some traders look for any ratio between the numbers mentioned, while others look for one or the other. For example, above it was mentioned that CD is a 1.618 to 2.24 extension of AB. Some harmonic traders will only look for 1.618 or 2.24, and disregard numbers in between unless they are very close to these specific numbers.

The Bat pattern is similar to Gartley in appearance, but not in measurement.

For the bearish pattern, look for short opportunities near D, with a stop loss not far above.

The Crab pattern is considered one of the most precise harmonic patterns, providing reversals in extremely close proximity to what the Fibonacci numbers indicate.

This pattern is similar to the butterfly, yet different in measurement.

For the bearish Crab pattern, enter a short near D, with a stop loss not far above.

Harmonic patterns can be a bit hard to spot with the naked eye, but, once a trader understands the pattern structure, they can be relatively easily spotted by Fibonacci tools. The primary harmonic patterns are 5-point (Gartley, Butterfly, Crab, Bat) patterns. These patterns have embedded 3-point (ABC) or 4-point (ABCD) patterns. All the price swings between these points are interrelated and have harmonic ratios based on Fibonacci. Patterns are either forming or have completed “M”- or “W”-shaped structures or combinations of “M” and “W,” in the case of 3-drives.

Harmonic patterns (5-point) have a critical origin (X) followed by an impulse wave (XA) followed by a corrective wave to form the “EYE” at (B) completing the AB leg. Then followed by a trend wave (BC) and finally completed by a corrective leg (CD). The critical harmonic ratios between these legs determine whether a pattern is a retracement-based or extension-based pattern, as well as its name (Gartley, Butterfly, Crab, Bat). One of the significant points to remember is that all 5-point and 4-point harmonic patterns have embedded ABC (3-Point) patterns.

All 5-point harmonic patterns have similar principles and structures. Though they differ in terms of their leg-length ratios and locations of key nodes (X, A, B, C, D), once you understand one pattern, it will be relatively easy to understand the others. It may help for traders to use an automated chart pattern recognition software like Trading Central to identify these patterns, rather than using the naked eye to find or force the patterns.

In harmonic setups, a trade is identified when the first 3 legs are completed (in 5-point patterns). For example, in the Gartley Bullish pattern, the XA, AB, and BC legs are completed and it starts to form the CD leg, you would identify a potential trade that may be in the works. Using the projections and retracements of the XA and BC legs, along with the Fibonacci ratios, we can build a price cluster to identify a potential Pattern Completion Zone (PCZ) and D point of the pattern. 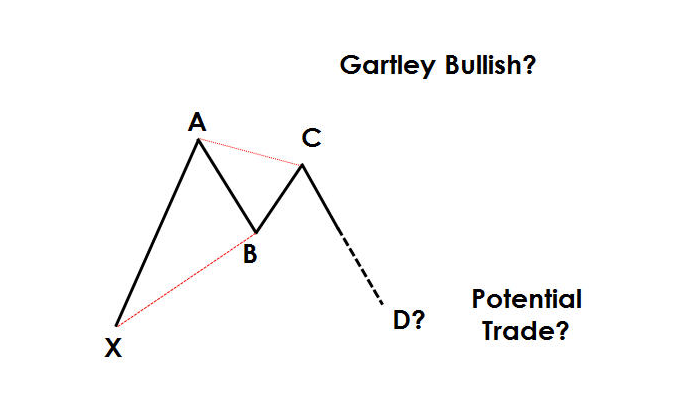 All harmonic patterns have defined Pattern Completion Zones (PCZ). These PCZs, which are also known as price clusters, are formed by the completed swing (legs) confluence of Fibonacci extensions, retracements, and price projections. The patterns generally complete their CD leg in the PCZ, then reverse. FX Harmonic trades are anticipated in this zone and entered on price reversal action.

As an example, the Pattern Completion Zone (PCZ) for the Bullish Gartley pattern is constructed using the following Fibonacci extensions and projections:

Below is an example of an idealized Potential Completion Zone (PCZ) formation: 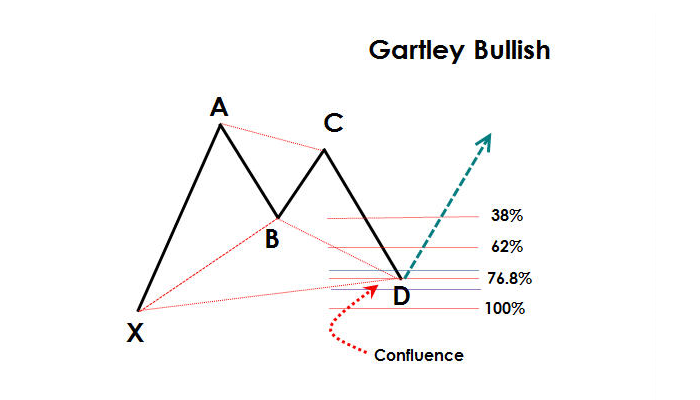 Most harmonic traders anticipate the pattern to reverse and attempt to trade these patterns in the “reversal zone” and end up taking contrarian (counter trend) trades. To enter a trade, it is preferred a confirmation of reversal price-action combined with a reversal trend change from the “reversal zones.”

Most harmonic pattern trade entries occur around the “D” point within the reversal zone. It could be a Buy (in bullish patterns) or a Sell (in bearish patterns). Usually, “D” is identified by a confluence of projections, retracements, and extensions of prior swings (legs), universally called a “reversal zone.” According to Scott Carney, when prices started to reach this zone, it is signaling an opportunity for a potential trade, not a signal to trade yet. The entry criteria and pattern validity are determined by various other factors like current volatility, underlying trend, volume structure within the pattern and market internals, etc. If the pattern is valid and the underlying trend and market internals agree with the Harmonic pattern reversal, then Entry levels (EL) can be calculated using price ranges, volatility, or some combination. The stop is placed above/below the last significant pivot (in 5 and 4-Point patterns it is below D for the bullish pattern, above D for bearish patterns).

It is important to note that potential target zones in harmonic patterns are computed from a probability standpoint, not with absolute certainty. Strong money and risk management rules and full working knowledge of the pattern are necessary for any pattern trading success.

Harmonic patterns enable a trader to identify the price level at which the trend of an asset can probably undergo a reversal. Thus, it gives an early entry advantage to a trader as long as the forecast turns out to be true. However, similar to any other trading system, the harmonic pattern has its own share of benefits and well as important drawbacks.

Before you start trading, you should consider using the educational resources we offer like CAPEX Academy or a demo trading account. CAPEX Academy has lots of courses for you to choose from, and they all tackle a different financial concept or process – like the basics of analyses – to help you to become a better trader.

It is not as easy to spot Head and Shoulders one would think because there needs to be a confirmation with a break below support or above resistance.

Popularly known as the ‘Doji candle’, the Doji candlestick chart pattern is one of the most unique formations in the world of trading.