The significant increases in the yields of American treasury bonds, with the 10-year bond reaching 4.26%, slowed the advances of the stock indices.

Following the wave of optimism that swept the market last Friday as a result of Fed official Daly's remarks, Monday's session was a little less euphoric.

US treasury bonds were sold along the curve despite expectations of a less aggressive Federal Reserve following its November 2 meeting. In principle, this could be due to sales by sovereign countries such as Japan, which is likely liquidating American treasury bonds to obtain the necessary dollars to intervene in the market and thus avoid the depreciation of the Japanese yen; and/or sales by China, which, following the consolidation of Xi Jinping's power, could be preparing for a stage of confrontation with the US over the dispute over Taiwan's sovereignty.

Yesterday's economic data, like the US manufacturing PMI and the S&P Global Composite PMI, showed that the US economy is slowing down and is already in a period of contraction. According to these figures, this would be reason enough for the firm demand for treasury bonds and yields to fall, but selling flows dominated the market. Something that did not occur with European bonds, including British bonds, was that they gained during the day.

The US dollar remained relatively stable, with gains against the yen and slight losses against the euro, which is gaining ground, most likely due to the ECB's forecast that interest rates will be raised by 0.75% at its meeting next Thursday.

The significant increases in the yields of American treasury bonds, with the 10-year bond reaching 4.26%, slowed the advances of the stock indices, with the Nasdaq being the most affected because technological stocks are the most sensitive to financing tightening.

Technically, the Nasdaq has stopped the bullish pace of the last few days right at the top of the bearish channel that has been running since mid-August of this year. It would need to break above this level and break out of the channel to gain upward momentum and, above all, break above the pivot zone of 11,690, which is the high reached earlier this month in October. 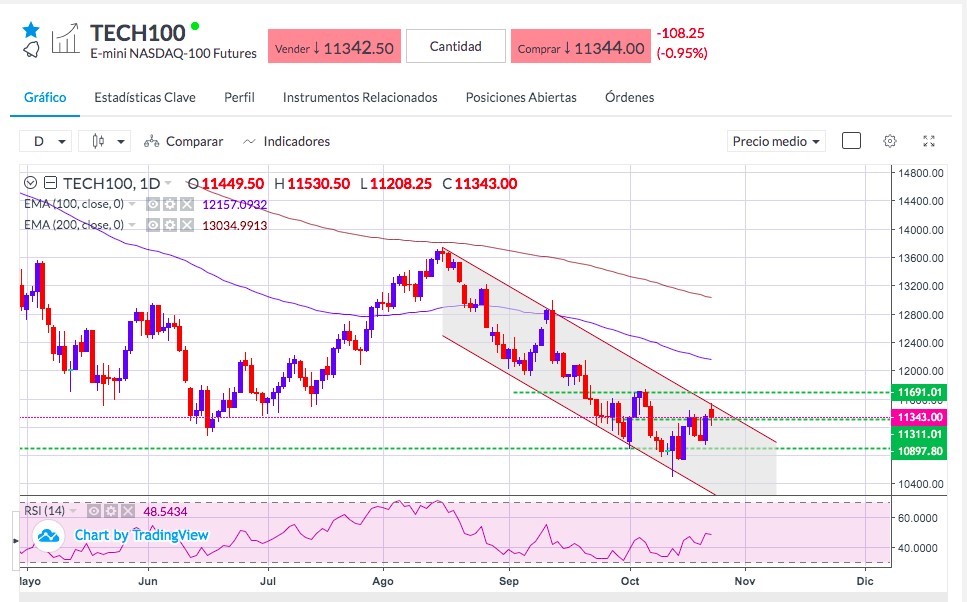