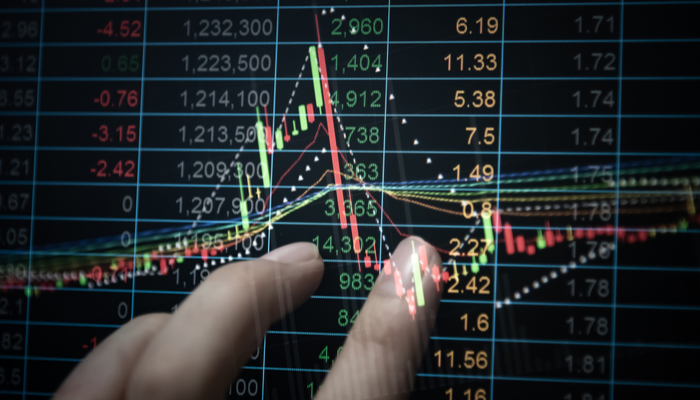 European bonds yields are also under the radar, with the German 10-year benchmark reaching levels close to 0% after having been in a negative zone in the last two years.

The vice president of the European Central Bank has made statements in this regard, saying that the current levels of long-term interest rates look favorable. However, if they continue their upward path, they will start representing a solid argument against its current monetary policy intended to favor financing conditions for stimulating the economy.

This sentiment is transmitted to the rest of the market and is the main reason why European bonds behave as they do. With the recovery rate of the European economy developing at a much lower level than before, ECB’s objectives might become harder to reach.

The comments and analysis on inflation expectations are abundant in the market. More and more voices warn about the Fed's passivity in the face of a potential inflationary threat.

All of these factors are directly affecting investors' risk sentiment and stock indices. Both North American and European benchmarks reflect it, either with lack of progress or downward corrections.

In the case of Germany’s DAX index, its uptrend stopped at the beginning of last month, and it is currently moving in the middle of a wide lateral range with a main support zone between the 15000 and 15100 levels. Under these levels, the last uptrend would open the way to the downside with targets in the 14500 area. 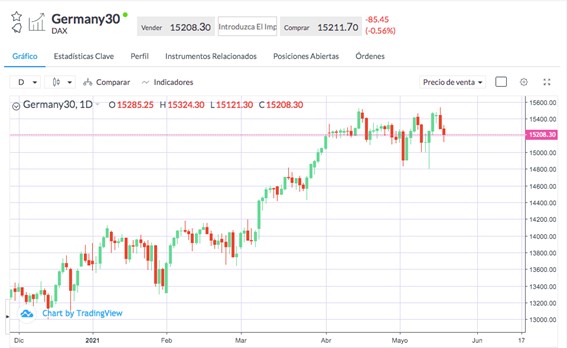 April’s CPI data for the euro area was published today, showing a figure of 1.6% in year-on-year terms, which is still far from the ECB's inflation target of around 2%. Therefore, the central bank could intensify its expansionary monetary policy without jeopardizing the inflation target.

A relevant movement is also taking place in the cryptocurrency market after China banned banks and applications from operating with the digital currency, in addition to Elon Musk's decision not to use bitcoin as a means of payment.

As a digital asset, Bitcoin is also influenced by negative investor sentiment at a general level and is increasingly showing a positive correlation with stock indices.

Technically it is now in a support zone around 40000, losing 40% compared to its all-time highs. Below this zone, the next support level would be around 29800. 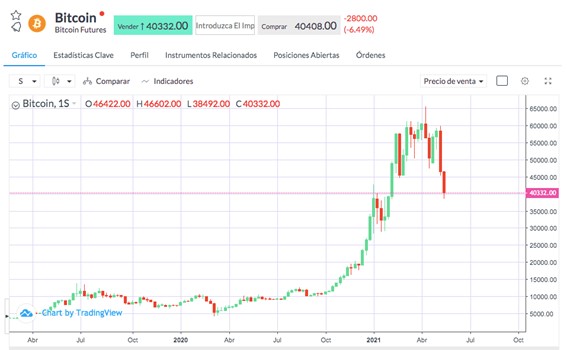