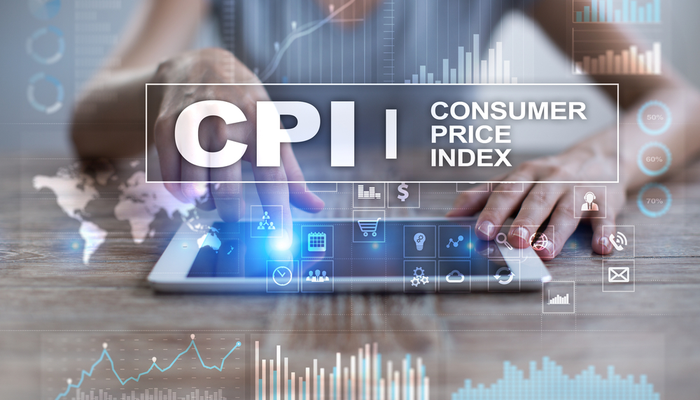 The figure published this morning in China has not been very encouraging with a return to negative numbers,-0.3% year-on-year in January from a previous 0.2%, showing a decline in the domestic demand of the second world economic power.

The pandemic has had negative effects on consumer confidence, not only in China but globally too. However, for the Asian country, the Yuan’s surge of more than 10% in comparison to the US Dollar since May 2020 has had a depressing effect on prices.

USD /CNH has experienced a continuous decline in the last 7 months and since the beginning of the year it has been forming a base around the level of 6.4200. 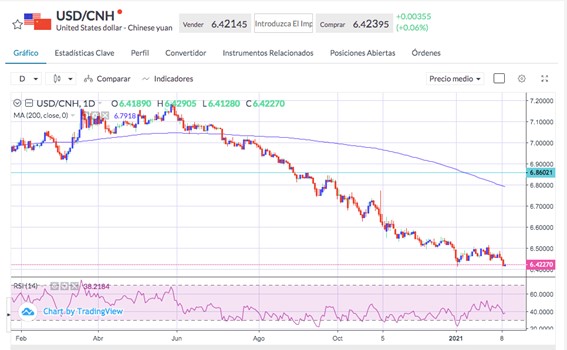 The price of the Chinese currency is controlled to a large extent by the monetary authorities of the country. The deflationary effects of a continuous appreciation, plus the restrictive factors that negatively affect Chinese exports, convinced the Asian authorities to vary the course of this trend, something that could result in upward pressure for the US Dollar.

For now, the US Dollar remains at the same levels reached yesterday after it corrected downwards against almost all counterparts.

Today, the U.S CPI data is due for release.

The future of the EUR/USD pair analyzed.

In the case of EUR/USD, the pair has corrected up to the 1.2125 area, after having broken down the important support area of ​​1.2065 in the previous days. 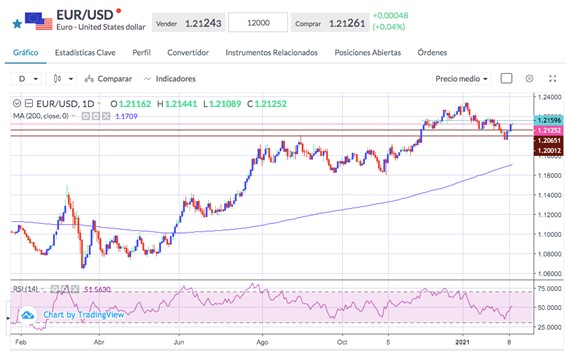 Technically, the pair needs to stay below this level to be considered in a downtrend, but the rejection of this breakout without continuation makes market analysts think that the pair may still have an upward journey. In fact, the influential investment bank Goldman Sachs has released its forecasts on the pair that places it at higher levels, 1.25 and 1.27, not only for this year but for 2022 as well.

However, the future evolution of the pair will depend on different factors. One of them is the US Dollar, which has recently shown strength due to the significant rise in yields on treasury bonds. If this trend continues, the pair could hardly reach higher levels.

Another factor to take into account is the "verbal intervention" of the ECB, which has explicitly expressed its disappointment with a stronger euro that acts as a counterweight to its current expansionary monetary policy. This has been one of the elements that have notably influenced the recent fall of the single currency.

In summary, in the current scenario, there are factors in favour and against the euro. For this reason, the EUR/USD pair has not managed to continue a downward movement that from a technical point of view had been confirmed, and therefore we will have to wait for all these elements are defined in a more concrete way so that a clearer trend is established.

The German CPI data for January was also published, showing a significant rise to 1% from -0.3% previously. If contrary to what we have witnessed in China, inflation in Europe shows upward tension, the ECB will find it difficult to maintain its current ultra-expansionary policy and this would have a bullish effect on the euro.