Inflationary fears are growing in the U.S. after the latest CPI came out - Market Overview 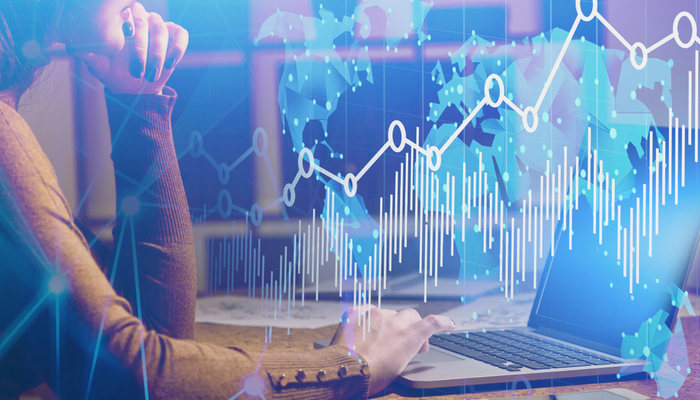 The economic data published yesterday, the U.S. CPI, did not calm inflationary fears. On the contrary, the consumer price index for June experienced the most significant rise in 13 years.

A good majority of economists agreed before the publication of this figure that inflation is a transitory phenomenon, aligning themselves with the views of the Chairman of the Federal Reserve, Jerome Powell.

However, the yield on the benchmark 10-year Treasury bond soared, exceeding 1.40%. The Fed Head will present the semiannual monetary policy report to the U.S. Congress on Wednesday.

The consumer price index rose 0.9% last month, the biggest gain since June 2008, after advancing 0.6% in May. The economists' forecasts were in favor of a 0.5%. The most significant jump was recorded in used car and truck prices, which surged 10.5%. That was the most significant jump since January 1953, when the government began tracking the series. Used cars and trucks have been the main drivers of inflation in recent months.

But there are signs that inflation is spreading beyond these sectors. Due to reopening the economy, consumers paid more for food, gasoline, rent and clothing last month. That could sharpen criticism of very accommodative monetary and fiscal policies. COVID-19 vaccines, low interest rates, and nearly $6 trillion in government aid since the pandemic began in the United States in March 2020 drive demand and pressure the supply chain.

To this increase in the CPI must be added Fed's preferred inflation figure, personal consumption expenditure, which rose 3.4% in May, the highest gain since April 1992.

Today, the producer price index is scheduled for publishing. Should it exceed the forecasts, it could deepen the market sentiment and create an inflationary process that would force the Fed to advance the withdrawal of stimuli, starting with reducing the purchase of bonds.

In such a scenario, the American 10-year bond Tnote fell 50 points after a brief hesitation as soon as the CPI figure was published. However, once the market digested the figure, the yield rose, reaching 1.42%. 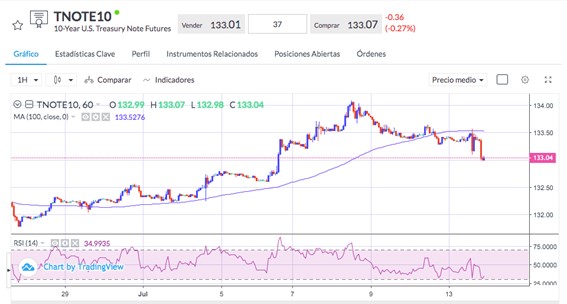 This has been immediately reflected in the currency market with widespread rises in the U.S. Dollar.

EUR/USD plunged near the 1.1780 support zone. Below such a figure, it could technically break through to the next support at 1.1710. 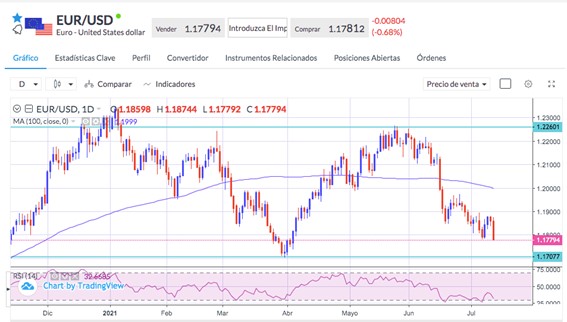