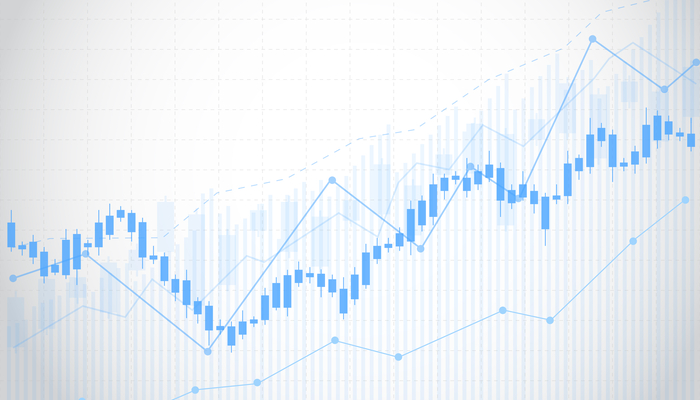 Uncertainties hover over the UK

The UK is swimming in troubled waters

The announcement by the prime minister of a lockdown in much of the United Kingdom due to, according to him, a mutation of the virus that makes it more transmissible and that is causing record numbers of contagion in his country, has aroused concern in markets and risk aversion is the predominant element.

In most European Union countries, a consensus has not yet been reached in this regard. They have decided to cancel air and maritime communications with Great Britain and fear that the mutations of the virus could become such that the recently approved vaccine is no longer sufficient for this newly mutated virus, has spread panic sentiment in global markets.

If that weren't enough, the Brexit negotiations are stalled again. It is feared that by the deadline of December 31, no agreement will be reached for a consensual exit of the United Kingdom from the European Union. This could cause an interim period with restrictions on imports with all that this entails, and a no-deal exit, so-called a hard Brexit.

The most notable consequence of all this situation of enormous uncertainty has been the Pound Sterling collapse, which has lost more than three figures in its price against the Dollar.

GBP/USD has broken below intermediate support zones and is approaching significant support at levels around 1.3130 where the 100-day SMA runs. Below this zone, it would make a bearish path towards levels below the 1.3000 psychological support. 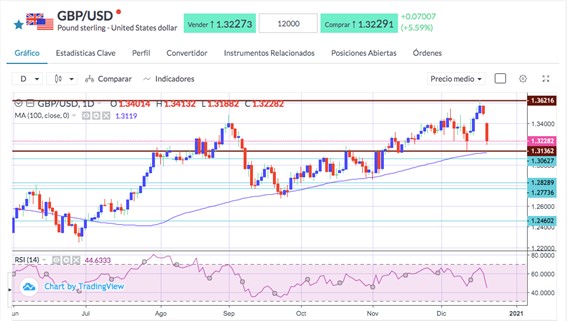 In this hasty return to market risk-off mode, the Dollar is once again acting as a safe haven currency. It has strengthened not only against the Pound but against all its central counterparties, including the USD/JPY, which has gained around 50 pips for the first time in the morning.

Gold reacted in the first instance to the upside, as a safe haven asset, in this case, slightly exceeding the $1900 area but immediately fell back to negative on the day, returning to the $1870 area. This rejection of the upward momentum is mainly due to the strength of the US Dollar with which the precious metal has an inverse correlation.

In the rest of Europe, the effect of the lockdown in the United Kingdom and the concern about the increase in the virulence of the virus has affected negatively, not only the Euro that lost ground against the US Dollar, something that fits within a technical correction, but also in stock indices.

The sectors that are being hit the hardest are services, those most directly affected by the mobility restriction measures that are being applied and that can be extended to Europe's whole. The tourism sector, air transport, and banks lost around 5% on the day.

The German DAX index has experienced a loss of 4%.

In the case of Germany, the report published by the DIW economic research institute has also had an influence, which predicts a fall in German GDP for the fourth quarter of 1%, a fall higher than expected by other institutions such as the IFO, and for the first quarter of next year does not expect any improvement given the evolving situation of the pandemic.

The German index is currently supported by an important price concentration zone that acts as the main support around 13,080 points. The recent upward trend would be considered to end and open a downward path, from a technical perspective, towards levels around 12,500. 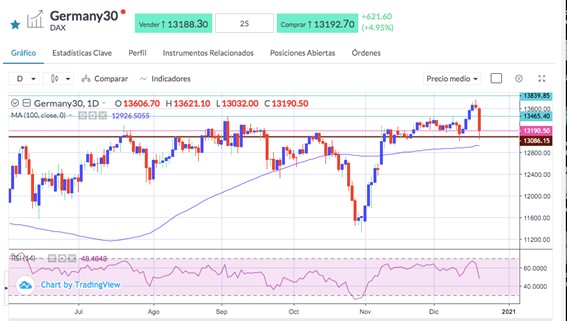