Brexit is done, US stimulus is done, 2020 is soon done – Market Overview 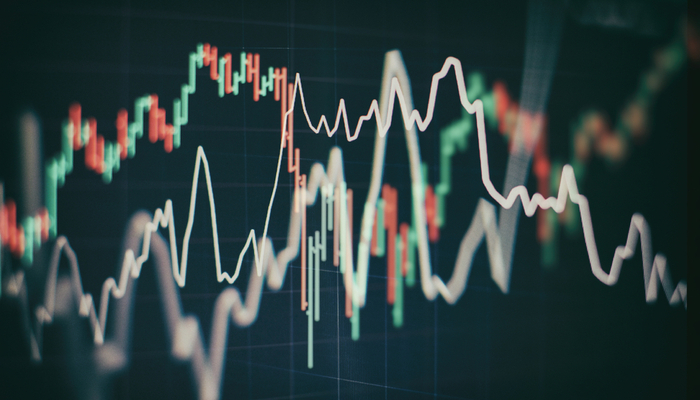 The approval of the $2,000 COVID aid checks has taken place in the United States House of Representatives.

Next Tuesday, it will go through the Senate approval process. It should be remembered that the amount of this aid was increased from less than 1000 Dollars at the proposal of the outgoing president Trump and that he has not encountered any reluctance on the part of the Democratic party that from the beginning of the negotiations had been in favor of more lavish spending on this type of aid.

Until the last moment, President Trump maintains his unpredictable behavior and, in this case, in a positive way that supposes some support for the markets.

The last political unknown, still pending clarification, is the composition of the Senate. For now, with partial scrutiny, Republicans lead Democrats with 50 seats to 40 Democrats. Still, a second-round has yet to be held in two stages, the so-called run-off elections that could undo the Republican advantage.

Democrats need to win in both stages to reach a Senate majority, while Republicans just need one. The first will be held on January 5 in Georgia, and this will be a risk factor that the markets will take into account in these Christmas days characterized by less activity in the markets. This result does not affect the presidential consequence at all.

Still, in the future, it could incline the economic policies proposed by the government towards more expansive or more public spending if the Democratic party were to dominate both the House of Representatives and the Senate.

Meanwhile, in the absence of the consolidation of the results of the Senate elections and without any factors that increase risk aversion (an aid package has been approved in the United States, an agreement on Brexit has been reached, and they are being administered vaccines against COVID worldwide), the US Dollar tends to weaken against all currencies driven down by the ultra-expansionary monetary policy of the Federal Reserve. This trend began as early as April after the Fed's immediate reaction cutting interest rates to record lows.

The dollar index remains pressured in the low part of its price of the last two weeks, and from a technical analysis point of view, it would find first support at the previous low located at 89.73.

Below, there is no major obstacle until 88.25, the minimum of February 2018. Although it is true that in the weekly chart, the RSI indicator is in the oversold zone and beginning what could be a bullish divergence that, if confirmed, would anticipate a corrective movement or lateral consolidation. 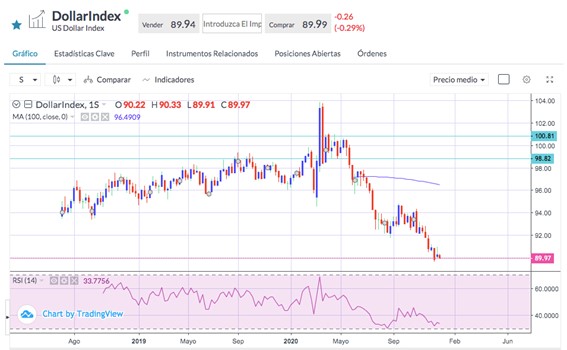 The currency pair with the highest weighting is EUR/USD in the Dollar index, just over 50%. This pair shows a relatively similar technical profile.

In the last two weeks, it is in a consolidation move with a resistance level of 1.2270 that it has not been able to overcome recently. Above these levels, it makes its way to a wide range of price concentration around 1.24. 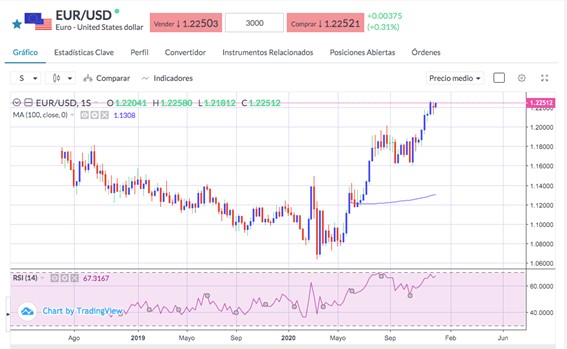 But in this case, on a weekly chart, the RSI is also overbought, and, although it does not show clear divergences yet, it shows signs of exhaustion. Therefore, it will be necessary a significant boost from the fundamentals so that the pair can easily exceed the last highs reached.